SENA is pleased to highlight one of our latest Adventure Seekers, Johnny Lewis. Johnny started his career in supermoto, and has also gained considerable experience in road racing and off-road racing. Now a full-time flat track racer, Lewis also teaches riders of all ages how to go fast, but also how to do it safely. “Everybody's going to ride motorcycles, but for me, I want to make sure they're doing it correctly,” says Johnny, before adding “Helping make people faster, but also safer on motorcycles.”

Founded in 2015, his school, Moto Anatomy, was built on the idea that every motorcycle rider is different to the next. At the heart of its operations is the often-overlooked fact that each rider needs their own natural talents to be supported in order to reach their highest potential.

Moto Anatomy teaches people from all walks of life. So far they’ve had the opportunity to help riders all the way from Johnny’s own kids’ of 2 and 3 years old to a student of 82 years old.

Accredited by AMA Pro Racing in Daytona Beach, American Flat Track (AFT) is one of the oldest motorcycle racing series in the US and the premier dirt track championship of the entire world. Some of the most iconic riders have come from this–the nation’s OG extreme sport–and Johnny Lewis is no exception.

Originally from Coatesville, Pennsylvania, Lewis got his first bike at just 5 years old. He quickly became one of the most naturally-talented riders to take to the sport at a young age. As a 15-year-old amateur at the 2004 AMA, Johnny earned Sports Athlete of the Year and AMA Sports Dirt Track Horizon Award honors as well as three national championships. From there, he went pro at 16 years old in AMA Supermoto, spending the next two years riding to victory for the Factory KTM crew.

His breakout was followed by a 2010 win in Dash for Cash, before taking his career-best finish during Daytona in 2011. Even though he had an injured ankle at the time of the 2011 Daytona races, Lewis came in second two days in a row. From there, he went on to secure his first National win at the Daytona short track in 2012.

In 2014, Johnny was chosen as 1 of 3 riders to represent the USA at the Supermoto of Nations in Italy. He took 4th place in X Games Flat Track in 2015–the year he also opened his school, Moto Anatomy. 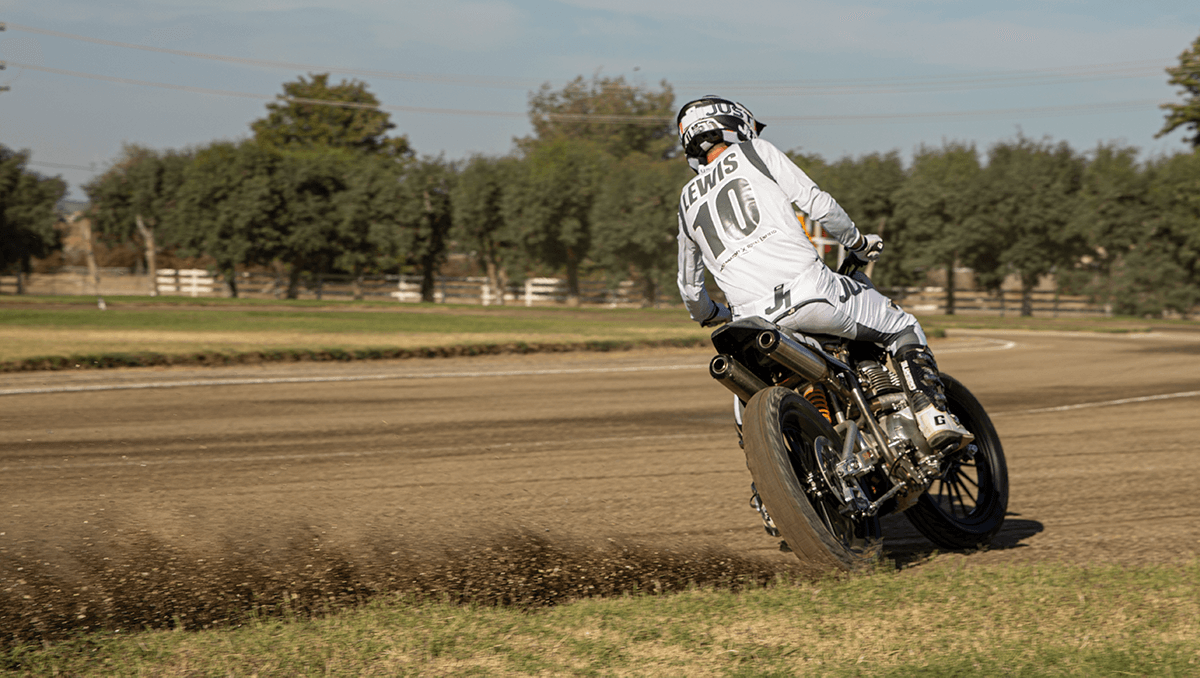 Back to the Track

In the 2020 off season, motorcycle company Royal Enfield looked to Lewis’ longstanding expertise to develop its all-new Twins FT racer. This officially brought him back to American Flat Track as he leads Royal Enfield’s entrance into the sport.

Johnny and his teammates worked around the clock for the best part of 2020 to design the bike and get it road-ready. In September 2020, the Royal Enfield Twins FT racer took its debut at the Atlanta Short Track and the AFT Finale in Daytona Beach. History was made when Johnny raced the new bike to mark the first ever AFT event that Royal Enfield had competed in.

Royal Enfield made its first motorcycle in 1901. An India-based subsidiary of Eicher Motors Limited, Royal Enfield has created a new mid-size motorcycle segment with modern motorcycles that hail from the icons of the past.

A common thread running through the essence of each Slide School rider’s experience is exhilarating new-found confidence after just one session. Many start their first class by either never having flat tracked before or having just dabbled in it. By the time these riders take their helmet off at the end of the day, many have said that not only is it unreasonably fun, but they feel like they’ve learned much more than they ever could’ve dreamed of learning so quickly.

That consistent sentiment among students is due to the teaching style which Johnny built from the dirt up. The school doesn’t just teach the mechanics of flat racing, but the posture and mentality as well. They teach you how to get out of your own head but also how to use it to your advantage during the ride. They show each student how to operate within the parameters of their own body–allowing them to properly align to their ride.

For some sessions, the Royal Enfield Slide School by Moto Anatomy also feeds students nourishing plant-based foods to keep them focused and alert. Johnny knows from experience how much of a difference nutrition can make in life on and off the track.

They’re remarkably different from most schools in many ways. The programs at Royal Enfield Slide School run from fall through to spring at their private facility; located an hour from Orlando International Airport and just over an hour from Tampa Int Airport in Center Hill, Florida.

One of the many elements that makes their teaching style unique is that from Spring until Fall they take the school on the road to offer training at remote locations across the U.S, Canada, and internationally. Classes out on the road are generally kept to 10-15 students and dates are added randomly throughout the seasons.


Johnny is the main instructor at the school but with a new full race schedule, you’ll need to request him specifically if you’d like to learn with him. They have tons of great tutors including guest instructors every so often. Guest instructors will either usually be other pros or rising star amateur riders.